Wondering how to accomplish a certain animation task? Ask here.

Hello all, I'm both new to the forum and the program.

I'm trying to figure out how to 'change scenes' in Moho, basically stitching scene 1 to scene 2 etc. Is this possible, or is editing something I should do with a dedicated editor like Adobe Premier or Lightworks? If it is better to do it externally, what would be the best settings in the export, as I noticed that something like ProRes isn't available?

For a very small and not too complex project it's possible to do everything in one project file in Moho. Put each scene into a group layer and drag them in and out of the screen when needed, or switch visibility.

Alright, thank you both.
Top

With almost any 2D or 3D animation program, It's fairly standard to output individual scenes and then assemble the scenes in an editor such as Adobe Premiere or Magix Vegas Pro. This is because a single scene containing many assets, multiple layers, deformation and effects can be computationally intensive, and it's not practical to try to animate many such scenes within a single project file. But when each scene is 'flattened' to an image sequence or movie file, the entire production becomes much easier to manage in the editing program.

A typical workflow is:

If you've never done this before, the above steps may seem like 'extra' work but in practice this it's easier to work this way when you're project is running more than a couple of scenes long.

Also, if you ever work with other animators on a production, breaking out the scenes like this makes it easier to share the tasks. But even when I'm working solo, I follow the above workflow...it really is just easier to work with.

For an animatic scene used as reference in Moho, I prefer to use a jpeg sequence with a separate uncompressed audio file. This offers smooth single frame accuracy, tends to use less RAM and streams more efficiently than a movie file over a network, which can be critical when working in a complicated animation scene with audio syncing. Since the animatic is used as 'non-rendering' reference, it does not need to be high quality.

For output, I typically render separate passes using the Layer Comps window and Moho Exporter, render image sequences, and assemble the passes in a compositing program like Fusion or After Effects, and then output a movie file for the editorial program. This is because lighting and effects are generally easier to do in a comp program. But when I'm not planning to use a compositing program, I may export a movie file directly from Moho for the editor.

Thank you Greenlaw, yeah sounds logical. Do you think an editor like Light Works is a good one?
Top

In general, I think using almost any video editor should be easier.

I tried LightWorks briefly but that was a long time ago so I can't fairly comment on the latest release. I do know many people like it. It's free so I would just try it and see how it works for you.

Personally, I like Vegas Pro because it works well when mixing different video and image formats and the audio support is quite good. But there are many video editors that should work well for editing animation.

If you really wish to stay inside the Moho environment, the workaround is to render all your scenes from separate projects as image sequences or movies, and then import the individual 'clips' to a new Moho project. Then you can use the Sequencer to place your 'clips' to create your edit.

It's a pretty straightforward system but, IMO, it's also very limited compared to using a dedicated video editor, especially if you have many scenes in your project and intend to add and mix audio for the animation.
Last edited by Greenlaw on Thu Jul 25, 2019 7:14 am, edited 2 times in total.
D.R. Greenlaw
Artist/Partner - Little Green Dog | Little Green Dog Channel on Vimeo | Greenlaw's Demo Reel 2019 Edtion
Lead Digital Animator, Dreamworks Animation

Yeah, if I need to export anyway, might as well use that external editor. Thanks.

While we're on the subject of using external editing programs...I'd love to get some insight from everyone. I feel like I keep running into these issues where my project falls out of sync as I export my shots and compile them in different programs. Here's my workflow:

Over the course of the project, though, it seems that I can fall out of sync by a frame or two with each shot. I have not been able to figure out where I'm going wrong and I've never had this problem in other programs. Am I just setting up my files incorrectly? I animate at 24fps and always make sure my editing program project settings (including image sequence fps settings) are 24fps, too. Maybe it's how I'm exporting from Moho? For example, in this project, does the audio end on frame 138, 139, or 140? 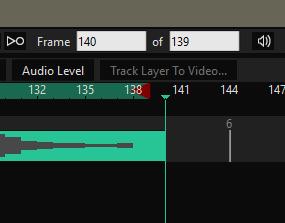 I had assumed that the end of the red triangle (frame 139) was the end of the audio file based on how the green triangle that appears on frame 1 is positioned. Is the end actually 138? I looked through the timeline and audio sections of the manual but couldn't find anything about the audio timeline markers.
Last edited by alanthebox on Fri Jul 26, 2019 7:00 pm, edited 2 times in total.
Top

Short answer: it never fits, that's why we do the audio stuff in an editing software.

There's so many sources of possible mistakes here. Some I did over the years:
- not matching frame rates everywhere
- having different sample frequencies
- cutting audio is sub-frame precise, cutting video only happens between frames

(The biggest blunder I had once with a job for a studio which provided me with the wrong sound files. Somebody had cut the dialogue wrong, so I scratched my head about audio which was mostly from the characters not in the shot. I animated some reaction and sent it, only to get all scenes back with "wrong sound, here's the correct files". No excuse, no additional payment, of course.)

This is just the technical side of it. The other side is about perception.

The chapter "How to make it sync?" in "Illusion of Life" starts with the animator's discovery that the visuals precede the sound by some frames, from usually one to three to (in extremes) even eight frames. Dialogue and accent sounds are in the temp track to be animated to, but the fine tuning only happens in editing, and that's where you move the sound.

And if you can't move the sound (because it's a song, or the middle part of a longer sentence), you need to move the visuals. This is why, in ye olden days, we cameramen shot an additional 5 frames at the end (and sometimes at the beginnig as well) of each scene, to get some padding for editing.

The weak point in your workflow is the idea of "master audio file". I understand the wish for doing something only once in a project. But you don't have that when you start. You have a temp track with all dialogue and some accent sounds (and music, if the beat is important).

After animation you edit the scenes and do the fine tuning of all audio, mainly putting it at the right point in time. Then you add atmosphere, background noises, music, whatever. And then comes the mix, filtering all tracks, get the balance right. If you're doing something for cmnematic release, this is the point where you have to think of spatial positioning of sound, and some planning to prepare tracks for re-recording (to Dolby 5.1 or whatever format.)
AS 9.5 MacPro Quadcore 3GHz 16GB RAM OS 10.6.8 Quicktime 7.6.6
AS 11 MacPro 12core 3GHz 32GB RAM OS 10.11 Quicktime 10.7.3
Top

Great post SlowTiger! Your explanation for why audio goes out of sync is way more complete than what I was going to write.

SlowTiger brings up a good point about difference between editing in Moho and a video editor. Moho's workflow is fairly linear and isn't ideal for making multiple changes in camera
framing, characters and environments (i.e., scene changes.) But this is exactly what a video editor was created for; a video editor is much more flexible when it comes to shifting and trimming individual scenes and audio clips.

Yes, Moho has its Sequencer window which is great for non-linear re-timing elements in a scene. Sequencer resembles the timeline in a video editor, but this window is a simplification of what a dedicated video editor does for editing hundreds of scenes for a whole production. Conversely, you wouldn't use a video editor to create animation footage like you would in Moho.
D.R. Greenlaw
Artist/Partner - Little Green Dog | Little Green Dog Channel on Vimeo | Greenlaw's Demo Reel 2019 Edtion
Lead Digital Animator, Dreamworks Animation

FeistyFettuccine wrote: ↑
Wed Jul 24, 2019 6:32 pm
Thank you Greenlaw, yeah sounds logical. Do you think an editor like Light Works is a good one?

I don't know but if you're on a budget: DaVinci Resolve has a free version and it's a seriously pro app for video editing.
https://www.blackmagicdesign.com/produc ... nciresolve

I found the workflow to be a bit cumbersome, though.

If you want to buy LightWorks pro, you're in for a subscription and within one year will pay the same as for Final Cut Pro (which in my opinion would be definitely the better choice, in case you're on a Mac).
Top
Post Reply
12 posts • Page 1 of 1